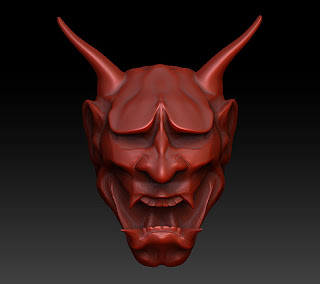 Its been quite a while since I've posted. Anti-depressants finally bring new art! Truthfully I've been very occupied with non-art projects. This is a 3d sketch I worked on and haven't finished yet, but wanted to post as a sketch.

The Hannya mask is used in many noh and kyogen Japanese plays. It portrays the souls of women who have become demons due to obsession or jealousy.

The mask is said to be dangerous and demonic, but also sorrowful and tormented, displaying the complexity of human emotions. When the actor looks straight ahead, the mask appears frightening and angry; when tilted slightly down, the face of the demon appears to be sorrowful, as though crying.